Hope for the Home Front

Email ThisBlogThis!Share to TwitterShare to FacebookShare to Pinterest
Labels: Army

Today one of my new found Chaplain's wife friends and I (and our kids) went to the Protestant Women of the Chapel (PWOC) Bible study this morning and had a great time. Today was called “Tea and Testimony Time”. They sat us at tables and each table had a “hostess” who had brought her own teacups and saucers as well as china pitchers and we each had a different flavor of tea packet in our cups. I was blessed to have a Vanilla Chai packet in my cup (my favorite)! We had a time of worship at the beginning and then several other worship songs were sung throughout. They gave out awards and nice bags to many of the ladies who had served or led Bible studies. This was the last meeting for this semester, so several of the ladies got up and gave a testimony about what PWOC had done for them or meant to them this year. One lady testified that through PWOC, she had come to know Christ and eventually her husband did too. He has now been sober for 9 months through the power of Christ and her life has been totally changed through the relationships she made at PWOC. That one made me cry, just being reminded that God is still powerful enough to change lives. Amen! "On Christ the solid rock I stand, all other ground is sinking sand..." They also had a change of command, so to speak, as the officers (i.e. president, vice-president) for the ’08-’09 year were retired to make way for the officers for the ’09-’10 year. The dynamic of the group is so diverse and multi-cultural. I saw several of the Chaplain’s wives there I had previously met. There are retiree spouses, widows, active duty spouses, and even some non-military spouses. It is pretty much like any other group you might find in a church setting – young, old, hurting, babes in Christ, mature, etc. We just all share a common bond through our spouses (and in some cases friends) who are in the military. I really enjoyed it and the atmosphere was so welcoming. It was a breath of fresh air to be in that kind of setting after being away from our home church so long. In her testimony, one of the ladies spoke about letting go of the facade of control that so many of us moms and wives think we have over our own lives...and give total control to God. Stop worrying about what you can't control and start channeling your energy toward what you can control...which is really only yourself. With the Army, unpredictability is the norm. Unfortunately for me, I am a planner extrordinaire and I know that will be a tough struggle. The lady who spoke said, women outside the military face this too, they just don't have any one thing to blame it on like we do... the Army! :) But despite the way it seems, Jesus still commands my destiny. The Army may look like they give the orders but as the Scripture says "In his heart a man plans his course, but the LORD determines his steps" Proverbs 16:9. We are never outside of his control or concern.
at May 19, 2009 1 comment:

As I sit and write this, I am in the backyard of our new home in North Carolina and it is a gorgeous day in May. It is a perfect 73 degrees outside and there is a gentle breeze. I am rocking in one of the chairs that goes with my new patio furniture set given to me by Tim and Dylan for Mother's Day. I am looking at the lush green grass and trees that surround me. And I am listening to the silence that surrounds me, except for only a few chirping sparrows and cooing doves. The dogs are quietly resting in their pen and Dylan is fast asleep. The house is all clean and I feel better than a pregnant woman should! This is truly a beautiful moment. No, it is not a dream...it is reality. And I am savoring it. After the months of seperation and transition that we endured, this is truly a moment of Heaven on Earth, a blessing from the Lord. I am truly thankful to Him for all he has done to bring us back together as a family, to get Tim off to a good start with his ministry, to give us a healthy baby and pregnancy, and to bless us with a good home and the luxury to be a stay-at-home-mother. My heart is full of gratitude, Lord. I do not know what the next curve in the road holds for us, but for today I'm rejoicing in the serenity that befalls me.
The heavens declare the glory of God; the skies proclaim the work of his hands. Day after day they pour forth speech; night after night they display knowledge.
Psalm 19:1-2
Our days here are slowly turning into a routine. Tim begins each day early with PT and returns home to us for breakfast and a shower. Then it's back to work at 9am and most days it he is home for lunch with us. At the end of the work day, we are back together again for dinner and family time. With the deployments that will come our way with Army life, I am grateful for this time of togetherness. The biggest thing I am grateful for at this point is the light I see in Tim's eyes...the assurance I see in his face as he is partaking in the ministry that the Lord has called him to. There is no shadow of doubt or hint of a question...just confirmation from the Lord. He has spent much of his time getting to know the soldiers in his battalion and making it known that he is an "accessible" Chaplain, with the prayer that when they are in need they know they can turn to him. The Chaplain that he is replacing has been mentoring him but will soon be leaving. In a couple of weeks it will be all Tim (and God!). On Sundays we have been visiting the various Chapels on post to try and find the one that suits Tim for ministry the best and that suits our family's needs. Each Chapel is so different and unique in its makeup. There are some similarities to a civilian church, but it is definitely Army-flavored. I hope once we settle on a Chapel that we can plug ourselves in to minister there. I also hope that we can find a Bible study or Sunday School for Tim and I and an AWANA type ministry for Dylan (and eventually Jordan). One Sunday morning service just isn't enough...I NEED and WANT more in my spiritual diet than that. It is definitely taking some determination on my part to get in personal Bible study time, or else I just run dry spiritually. I think I realize that I was spoiled through all that came my way from the Scriptures at our home church. Last week I attended a Chaplain's wives event, and it was a great experience. Every month or so, the Chaplain's wives get together for a coffee or a dinner in an effort to get to know one another. This month they had a dinner at a nice, historic restaurant in Fayetteville. The food was good but the fellowship was even better. I met so many wonderful women whose husbands serve in the US Army as Chaplains here at Ft Bragg. Undoubtedly I was the newest Chaplain's wife (and maybe the youngest :) but it did not bother me. I am learning to glean from the best and to find wisdom in those who have gone before me down this path. I am thankful that such a community exists and look forward to finding my niche within.
at May 12, 2009 1 comment:

Pictures of our on-post house

Here are a few pictures I took of the outside of our on-post house. It is a nice, newly refurbished duplex in a GREAT neighborhood and we are happy here. Since I took these pics, the lawn care guys came and trimmed back the tall bushes so they're not quite so bushy!! Front view of the house 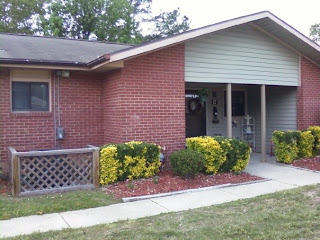 Left front view of the house 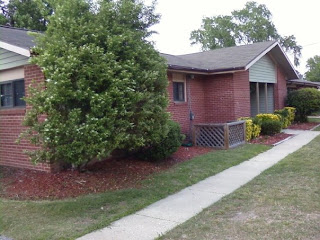 Left side view of the house 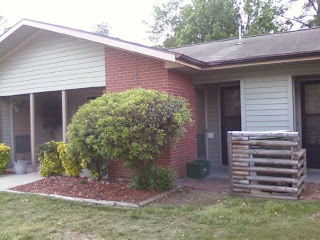 Right front view of the house 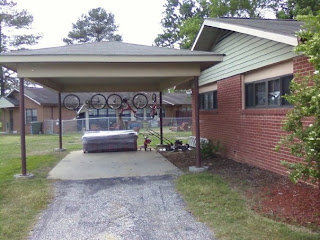 Carport view (the couch is gone!! Sold at the post-wide yard sale!)
The post-wide yard sale went well for us...we were able to rid ourselves of alot of things that we can't use/don't need/don't have space for anymore since moving here from our larger house. And we made a pretty good profit too! We got to know some of our neighbors better and met some new neighbors. All in all it was a great day! God continues to bless us here and we continue to find our joy and satisfaction in His presence.
at May 02, 2009 2 comments: