In April, I had the opportunity to accompany Chaplain to San Antonio for a week-long Strong Bonds training event. The Army paid our tab and we were trained in several different curricula which we can use at future Strong Bonds events. This was an incredible blessing to be co-trained with my Chaplain-husband and also to be able to spend one-on-one time with him (kids were at grandma/grandpa's!) so close to our anniversary (10 years on May 13th!). What an awesome privilege and perk brought to us Chaplain wives by the U.S. Army! If you are an Army or Air Guard Chaplain wife, training events are happening around the country several times a year. I highly recommend that you seek out this opportunity and take full advantage of it! 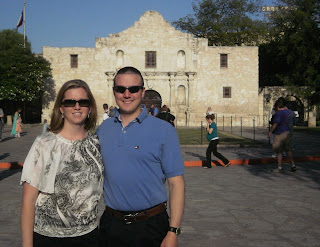 Not too long after this training even (2 weeks later, I think) Chaplain and I put together a retreat which took place at the Great Wolf Lodge in Concord, NC. We used Mark Gungor's Laugh Your Way To A Better Marriage…which was a huge success. I wasn't sure how it would go since the curriculum is heavily DVD-based. But Mark is such a funny guy that he made the DVD time fly by fast. For security reasons, I am not able to put up pictures of the retreat itself, but here is a pic of our family outside this phenomenal resort! 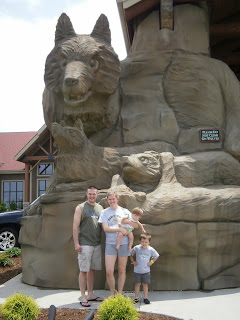 The first weekend in June was had our last retreat before deployment. We went back to Myrtle Beach and Chaplain did this one mostly on his own. He made it a 'pre-deployment' retreat and covered topics such as resiliency, readiness, and communication. We had good attendance and a lot of great feedback. Time at the beach with our two kiddos was a blast. Dylan learned the art of surfing and Jordan learned what sand tastes like! We made it back from this retreat just in time to see our Cubbie "graduate" from his first year in AWANA Cubbies. 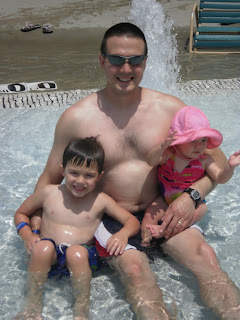 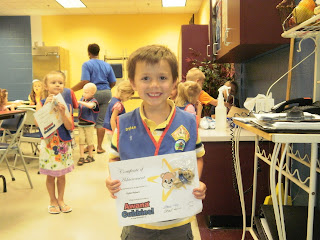 Dylan at the final Cubbies class of this year.

Chaplain's deployment is fast approaching. Time has been going very fast for a while with retreats and FRG meetings and planning sessions. However, Chaplain's Battalion has some time carved out this summer for "Block Leave" (i.e. a block of time where everyone is highly encouraged to take leave time). So we will be chillin' at home and at the pool, getting small projects done and taking care of odds-and-ends things. Also this summer we have a trip to Disney planned that I pray the kids will remember (at least Dylan) fondly during the coming year.

So many thoughts and emotions are running around in my head at the same time and all the time that it is hard to keep sane thoughts straight! On top of all the aforementioned stuff, the Army has determined our move-in date (to our new, bigger home) to be around the same time frame as deployment! Fortunately, we were able to defer that a bit and will plan on moving in shortly after we have seen 'Daddy' off and had time to deal with the flood of emotions that will come. At this point, I am holding fast to 2 things. 1) The Lord has a plan, purpose, and mission in mind for Chaplain each and every day that he will be away from us (just as he has had while Chaplain has been here with us) – in other words, this deployment is no accident, it is orchestrated! 2) The Lord has a plan, purpose, and mission in mind for me (equally as important as Chaplain's) each and every day that I will be away from him (again, just as he has had before). Our ten-year marriage is about to undergo a huge strain and test of strength and character. Believe me, I am on my knees talking to the Father frequently about this! But rather than worry and hyper-focus on each and every insecurity and question, I am vowing to take it one day at a time (with a planning-eye to the future ;) and allow the Lord to step in and be the husband that even Chaplain can't be to me. Seeking the mercy and loving-kindness of the Shepherd…~Jenn
at June 13, 2010 No comments: